I recently found out that a channel I enjoy watching, Extra Credits, also does many other episodes. These include Games Design, Plot writing, and Game Creation. I found a playlist full of Storytelling and Writing videos that I am incredibly tempted to just binge through. The 52 video playlist has everything from Morality Systems to Symbolism, and what is bad writing. Extra Credits states in the video that a conflict of morality is much more enjoyable than a linear moral code. And the player is forced to participate in it too. I’ll give an example below.

The player must choose between saving their best friend or a scientist from falling to their deaths. The scientist has a cure that could save millions of people from a disease. Whereas the best friend has been with the player for the entire journey and has built an emotional connection with them. The player must choose between saving their friend or letting them die and saving millions of others. This is a very difficult task for the player as they must choose to ignore their emotional connection. They will be sacrificing one part of their morality for another. They will also be  leaving an emotional scar on their player throughout the rest of the game. Extra Credits states that difficult Moral decisions are what players will still be talking about long after finishing their game. And it’s true. Years after playing the likes of Call of Duty Black Ops 2, we still bring up decisions we made. These would be decisions that deeply impacted the character and/or the virtual world, either for the better or worse. 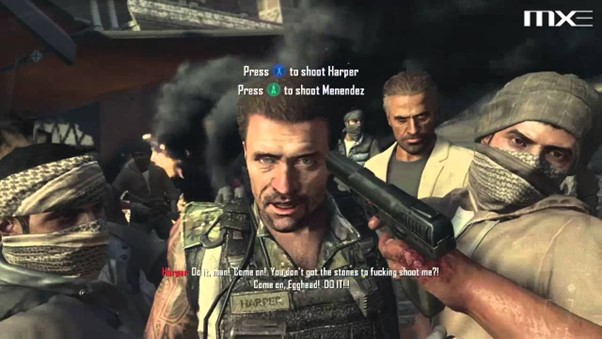 In Call of Duty: Black Ops 2, you are given multiple split-second difficult decisions. These can drastically alter the gameplay and story the player experiences. These usually happen through holding the players’ emotional connections hostage and choosing to attempt to kill the main antagonist, Menendez. However, in the process the current player character is killed. Another way is forcing the player to kill a friend in order to secure the bigger picture. The image above is a screenshot of the choice you get. You can either kill your best friend Harper and keep undercover or to attempt to kill Menendez to save Harper. Unfortunately (spoiler alert), if you choose to kill Menendez you fail and are shot, however saving Harper. If you choose to kill Harper, your cover is secured, but you’re left with the fact you shot Harper. Most games that have Moral Conflict decisions also include dialogue choices between characters. This is where the player can choose between being a good ethical man or a d*ckhead. This is prevalent in the Fallout series, making it a defining factor in its success, both as an RPG and as a Triple-A game. 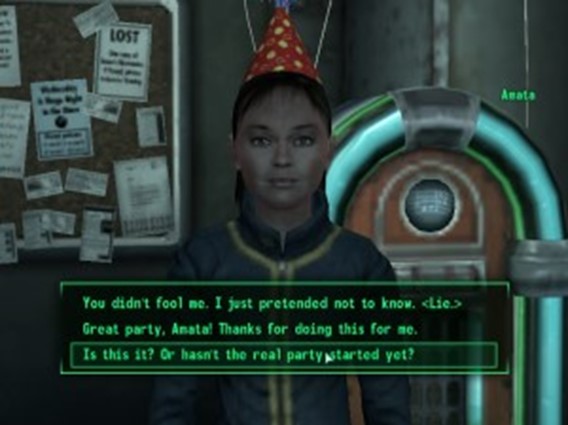 The image above is an example of the dialogue and morality dialogue system within Fallout 3. In the game, you have options to lie, be humble, be an a-hole, and many other options. Fall Out 3 is the ideal game for people wishing to have more interaction with NPCs and morality systems. Games such as Far Cry 4 have a sort of Karma system to regulate the players’ behaviour in-game. The player won’t feel like they’re pressured into aligning to a certain type of playstyle. For example, you’re rewarded for helping people and “purifying” your soul through dharma wheels and are punished for killing civilians.

This is the standard line of morality we see in a lot of games. Although, in recent years this is changing to include more of the choices and decisions that I explained above. The clue of this line is in the name.  The players’ character follows a strict linear morality that the player cannot change or influence. Or it’s where the villain is a constant evil and does not fluctuate or hint at a redemption act. These are the more traditional storytelling in games and the usual for first-person shooters.