So, who were the parents of the computer? We work, we study and even play on the computer, but who invented it? 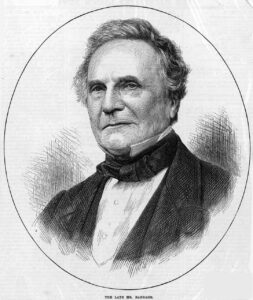 During the 19th century, Charles Babbage became the first person to design and build a mechanical computer. Joseph Marie Jacquard built a computerized loom that used punched wooden cards to automatically weave fabric patterns. This punching of cards would become valuable to Babbage when designing his Analytical Engine in 1834. Babbage was well-known for his contributions to society and inventions such as the engine for calculating mathematical and astronomical tables.

Charles was born in 1791 in London and brought up in Devon with his three siblings. His parents were Benjamin and Elizabeth (Betty) Babbage, the former being a banking partner on Fleet Street in London. From an early age, Babbage was interested in the mechanics of everything he came across. He would sit and take a toy apart to see how it worked or ask his parents what was inside. He went to Cambridge University and, having already studied higher Maths in textbooks, became the top mathematician there. Babbage married Georgina Whitmore in 1814 and started a large family of 8 children.

Unfortunately, only half of these children were to survive childhood. In 1827, Georgina was pregnant and unfortunately, mother and baby son died during childbirth. If this was not heart-breaking enough for Babbage, he also lost his father in the same year. Seven years later in September 1834, his teen daughter Georgiana also died at the age of 16. Babbage was beyond grief at this point, having lost so much in such a short space of time. He decided to throw himself completely into his work. Charles Babbage never remarried.

When he embarked on life after university, he found life a little difficult as he was overlooked for jobs. During this period, he relied heavily on handouts from his father, much to his own dissatisfaction. He had expected to have found a teaching job or anything he could use his technical skills for during this period. He did manage to become a member of high-profile societal groups. One of these groups, The Royal Society, would eventually help him to secure funding for his Difference Engine.

Babbage had a thirst for knowledge and became a mathematician, mechanical engineer, inventor, and philosopher. In 1821, Babbage devised a plan for a mechanical calculating machine that could solve complex and problematic calculations that even today’s normal calculator is incapable of. Joseph Clement was recommended by a friend of Babbage to build the machine to the exact specifications set out by Babbage. The government recognised this opportunity and gave him funding for it in 1823.

No More Money In The Pot

Although the plan was exceptional and was predicted by many to succeed, the materials were too expensive and difficult to obtain. It also became clear that the Difference Engine was too heavy. People grew tired of continous delay and the poor standard of working equipment being used.  Soon after, in 1842, the government decided to axe the funding for the Difference Engine. When Babbage’s father died in 1827, he left Babbage a hefty sum of money. This gave Babbage some financial stability to be able to carry on pursuing his career in designing and developing his inventions. In 1847, Babbage was to attempt the Difference Engine again, this time without the printing tool.

In 1834, Babbage designed a new engine called the Analytical Engine which was steam driven. Unlike the difference engine that could only add numbers together, this machine was capable of addition, multiplication, subtraction, and division. This was not just a calculator though; this was an all-purpose computer. It was designed and built to be fully automated (including the printer) with storage large enough to hold 1000-digit numbers! Babbage is considered the father of the computer, having invented the world’s first programmable computer. 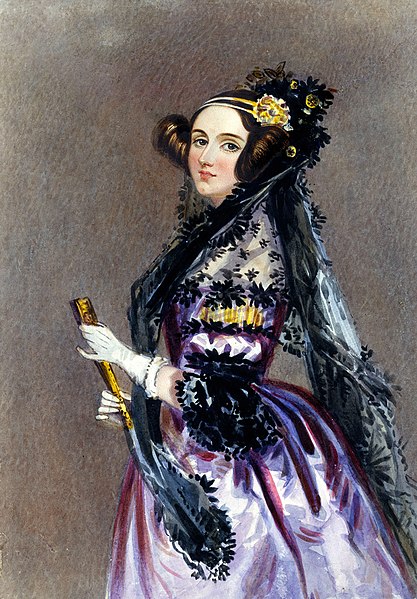 A lady called Augusta Ada King; the Countess of Lovelace (aka Ada Lovelace) was an English mathematician and writer. The only child of a mathematician (her mother) and poet (her father), Augusta Ada Byron was born on the 10th December 1815 in London.

She Had To Leave The Family Home

Lord Byron, a manic depressive and promiscuous, grew tired of being tied down when Ada was a few weeks old. Lady Byron was forced to take Ada to live at her parents, while Lord Byron eventually  moved abroad. Lady Byron tried to keep her daughter away from any form of poetry, one could assume because of her father. She encouraged her to study Mathematics, French, and Music. Although Mathematics was an unusual subject for a lady to study at that time, she excelled in it. Ada never saw her father again as he died in Missolonghi Greece, when she was only 8 years old.

In 1833, Ada was introduced to Babbage by a mutual friend at a party. Babbage intrigued her with his explanations of his ‘Difference Engine,’ to a point where she had to know more. Having taken her mother back for another demonstration of the machine (by Babbage’s invitation), she soon became his understudy.  Ada continued to pursue her mathematical studies including seeing the Jacquard Loom in person. She visited factories and found out how different things worked. Like Babbage, Ada was also interested in the mechanics of things and designed a flying machine at 12 years old.

The Countess of Lovelace

In 1835, at the age of 19, Ada married fellow scientist William King and became Augusta King. In 1837, William was given the title Earl of Lovelace and Ada became the Countess of Lovelace. Hence the name Ada Lovelace. Between 1836 and 1839, they had three children, named Byron, Anne and Ralph. After having her children, Ada decided to go back to her passion of Mathematics. With the help of Mary Somerville and Professor Augustus De Morgan of the University College of London, she advanced her learning. Ada considered mathematics to have a certain poetry about it. Of course, it did not please her mother to hear Ada speak about anything to do with poetry. She blamed poetry for her ex-husbands’ ‘madness’.

In 1843, Ada famously translated an article written by the famous Italian mathematician Luigi Federico Menabrea. His article gave details about Babbage’s Analytical Machine and was titled ‘Notions Sur La machine Analytique de Charles Babbage’.  Ada translated this article and added her own notes alongside the research (an internet resource developed by Christopher D Green click here to view>>). Ada described how the analytical engine could be programmed fully to calculate Bernoulli numbers. With the step-by-step guides received from Ada, Babbage was able to programme the Analytical machine into a functional computer. Ada is considered the mother of the computer and as the first ever computer programmer!